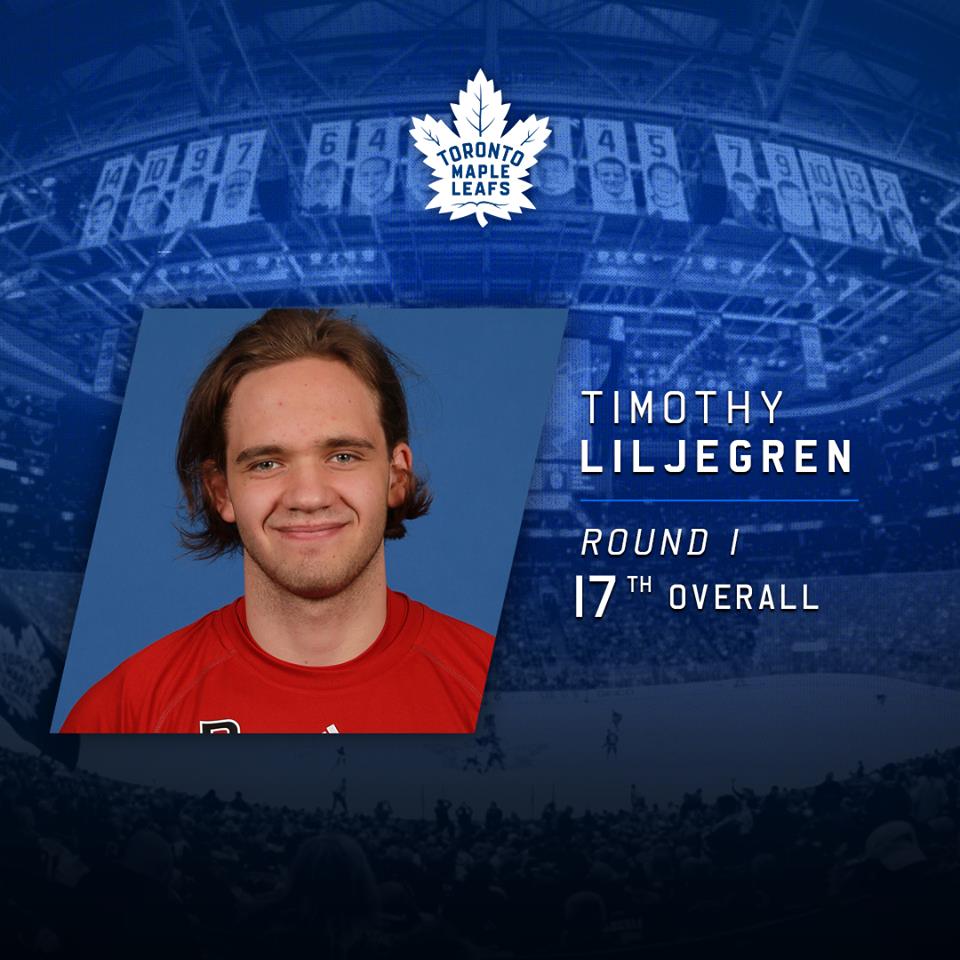 The process of drafting in any professional sport isn’t an exact science, a lot needs to be taken into consideration like Hockey IQ, Maturity/Character of the player, and there are also intangibles that factor into any draft decision. All these factors make the gift from the Hockey Gods in the form of Timothy Liljegren that much more special and exciting from a Maple Leafs perspective. The Maple Leafs may have drafted the biggest steal in this year draft when selecting Timothy Liljegren.

Many predicted Liljegren would have a stellar season and would find himself atop the draft. Unfortunately, after bouncing around between a couple of teams last season, Liljegren struggled to adapt to the constant changes. Contracting mono only further compounded his problems and together, this made for a very tough year for the young defenseman, reflected both in his lackluster performance and poor stats. Despite the circumstantial nature of these problems, many scouts were concerned about his viability in the NHL causing him to slide down the draft.

Although unfortunate for Liljegren, this was a ripe opportunity for the Maple Leafs to acquire a top-end offensive defenceman. Originally, many would have thought Liljegren would be selected in the top 5. The Maple Leafs stole him with their 17th overall pick and I could not have been more excited. By providing him with greater team stability and playing 100% healthy, I predict he will be the exciting player most scouts and hockey observers believed he would be, and demonstrate why he should have been a top 5 pick.

The remaining drafts picks in the later rounds may not be flashy names we would have expected or wanted, but they all serve a purpose in rounding out the Maple Leafs prospect pool which has lacked size and was thin on defensive prospects in the pipeline. This definitely influenced the choices in the later rounds of this past June’s draft. The Maple Leafs can tout some of the most skilled and exciting forward prospect pool anywhere in the NHL, but lacked much needed size and options on the defensive end by drafting Liljegren, Eemeli Rasanen, Fedor Gordeev it filled that immediate and future need by adding much needed defensive options in the near future.

If I had to give the overall draft a grade, I would give the Maple Leafs a B. They hit a home run with Liljegren, but the other prospects selected need more seasoning in the minors and we will not know their full value for another 2-3 years. Which is hard to give them a better grade as their later rounds picks are projects and still require another 2-3 years of growth on their minor league teams than another year or so with Toronto Marlies.

We can as fans make decisions by simply looking at stat sheets to see who the Maple Leafs should have or could have drafted but there are many things the Maple Leafs scouts take into account and I am confident in the likes of Mark Hunter and company that they have probably hit a couple more homeruns when everything is said and done. I am sure they took into account all the requirements in their prospect pool, success to date and those unique attributes that won’t always appear on the stat sheets but that effect the chance of success in the NHL when their time comes to make the big club.

Too be honest, one final point. How exciting is it to be talking about our favorite hockey team in the middle of the summer? Check out early next week for the blog which discusses the Maple Leafs Free Agency signings and re-signings!