If it were up to me, the NHL’s Trade Deadline Day should be a national holiday! Or at least a “work from home” day where hockey fans from coast to coast can turn on their choice of trade deadline coverage presented by either of Canada’s major networks and simply enjoy the chaos. According to CapFriendly, this deadline was the busiest in terms of number of trades over the last 3 years. A surprising stat knowing how significant the cap factors into deals made during the season, where a mechanism such as LTIR is so critical to maneuver as we found with the Maple Leafs today.

Now that I have had a solid 48 hours to think about the events that transpired on Saturday night and more holistically the entire season up until today, I found myself more eager than ever to hear Kyle Dubas speak at his post-trade-deadline press conference on late Monday afternoon. As a fan, I wanted answers!!! Answers for lack of impatience to make a move for a capable backup (which so far we seem to have now found in Jack Campbell), answers for the inactivity to improve team defence, and most importantly answers for the lack of consistent effort and attention to detail on a night-by-night basis! I wasn’t looking for knee-jerk trade that we would end up regretting in the future. All I wanted was an explanation on these topics because I believed they are the 3 main factors as to why this team is will be battling for their playoff lives over the remaining 19 games.

The way Dubas handled the goalie position this off-season is one of his biggest failures and most definitely one that will get a bright light shone on it if this team doesn’t make the playoffs. Before the Leafs made the move to bring in Campbell and Clifford, the Leafs were DEAD LAST in the NHL in points earned by their backup. Michael Hutchinson appeared in 15 games this season with a 4-9-0 record… 2 or 3 more wins could be the difference between making the playoffs and not.

Unfortunately for me, this topic was not covered in the press conference other than the fact that it was announced that Hutchinson had been traded to Colorado for Calle Rosen (who comes back to Toronto after being involved in the Kadri deal). Nonetheless, how can anyone with a hint of perspective even blame Hutchinson for his lack of results here? It was clear before the season that this team needed a stable backup goalie to carrie some of the load off Andersen who has been and large the busiest goalie in the NHL since he put on a Leafs jersey back in 2016/2017 (Tied for 1st in GP, 1st in GS, 1st in SA, 2nd in High Danger SA – all courtesy of Natural Stattrick).

However, Dubas was willing to hand the job to Hutchinson after a false hoped attempt to give Neuvirth a chance. This decision ended up turning into a double jeopardy problem for the Leafs as it lead to a tired and then injured Andersen who was sporting a bottom 10 SV% since January 1st.

Lastly I found that the other two questions I wanted answered go hand in hand, team defence AND consistent effort! Since the coaching change, Toronto has the 9th worst GA/60 with 2.93 at even strength and still remains a bottom 10 in penalty killing in the league (courtesy of Natural Stattrick). The facts are that for a significant portion of those games the Leafs have been without their biggest minute munching defenceman in Morgan Rielly and also their best “defender” in Jake Muzzin for a few weeks as well. Although, we expected this team to have a “next man up” mentality like other contenders like Pittsburgh have… they folded like lawn chairs and failed to battle any sort of adversity that this season threw their way. Now what did Dubas have to say for all this? In short form, he essentially said “I don’t know” and continued to be forthright in the fact that this is the process that all teams that want to have success must go through.

Overall, Dubas’ answers did not fuel any prevalent fires in my mind that I still clearly had from that debacle of a week. But they also didn’t really give me any peace of mind either to the concerns I still had about the roster. I was a huge advocate for trading Tyson Barrie simply because I don’t think his performance thus far indicated he was a needle-mover to help this team make a miracle playoff run and also I think there is a very minimal chance he is coming back. I believe the Leafs could of used any of the assets that they recouped from Barrie as building blocks to help them acquire a true top 4 defenceman to pair with Morgan Rielly for the future.

Nonetheless, I still believe Dubas did some good work to help boost the fringes of this roster by adding Campbell, Clifford and Malgin as well as extend a significant piece of the d-core. Anyone who follows me on Twitter (@anthonycino13) knows that Jake Muzzin is my favourite defenceman on the team and anyone who has listened to him speak knows that he is the voice of true honesty and self-reflection on this team. People seem to be worried about his age regression but to those people I’d remind them of this quote from Ray Ferraro on TSN’s Overdrive show last week, “If the Leafs let Muzzin walk to UFA, they’d be trying to sign a guy exactly like him and you won’t find a guy like him for less than $5.625M AAV”.

The way I suggest approaching the rest of the season in terms of watching this team is to try and treat this 2019/2020 version of the Leafs as you did the 2016/2017 version. A team with very clear flaws, but still with a decent shot of making the playoffs and just enjoy the rollercoaster ride of emotions that is an NHL playoff race! And if they make it? Who knows… maybe in mid-April this team surprises us with a performance for the ages, but I feel changing my expectations for these remaining 19 games will help me enjoy them a bit more.

In terms of a longer-term outlook on this roster, I used CapFriendly to help give a general idea of the depth chart after Dubas’ moves this season (assuming the salary cap goes up by $3M to $84.5M): 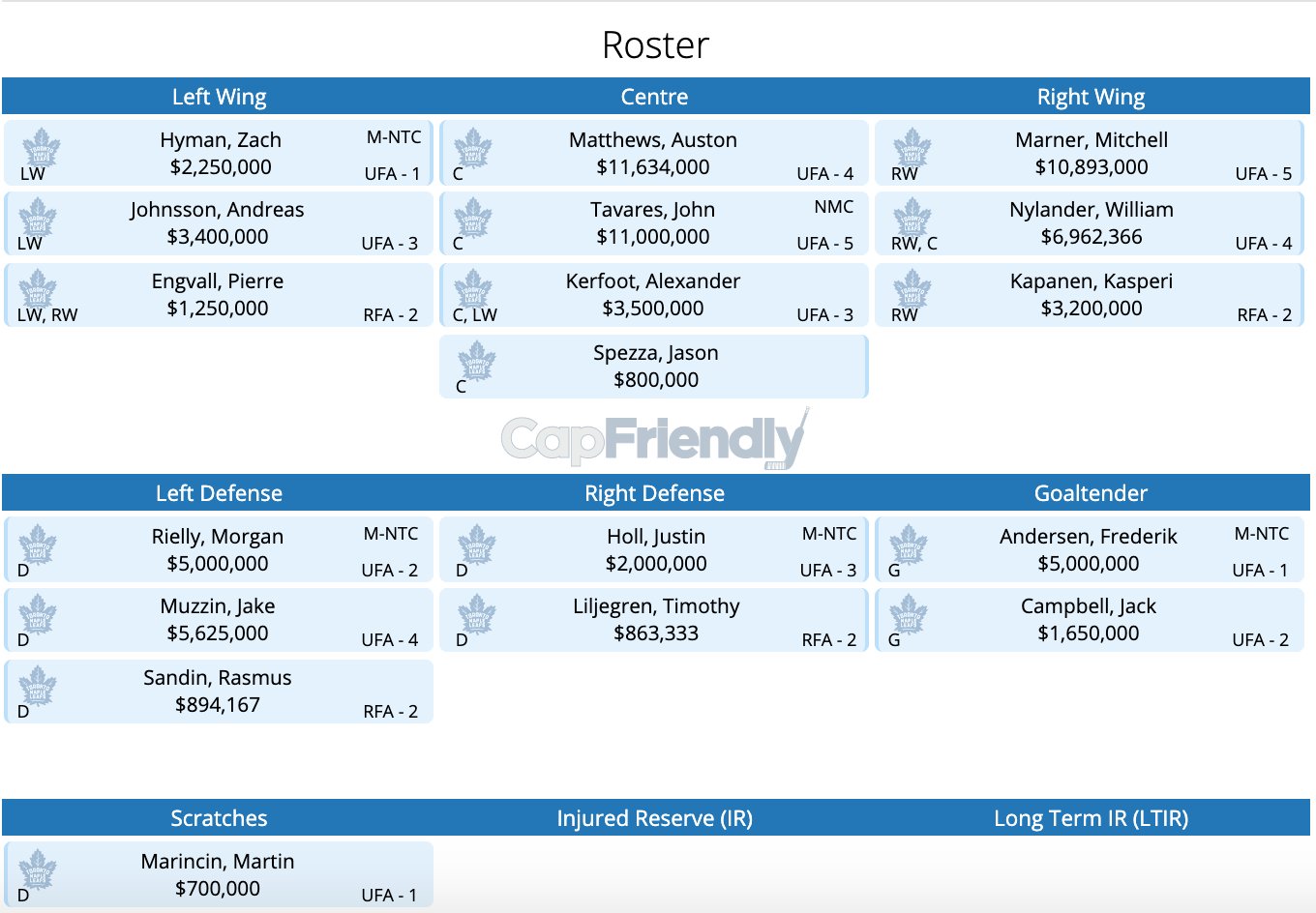 This general outlook assumes they sign Spezza back for league minimum to be the 4C again, and leaves them with $6,678,134 in Cap Space for 3 more bottom-6 forwards and 1 top-4 defenceman. It is quite clear to me that a trade is necessary to help improve the d-core so all of this is subject to change.

The future of this team I don’t think is altered by how this season ends, but it is quite clear to me that if this team wants to have any type of success in the future they need to use these next 19 games as a platform to decide what the standard is going to be for this hockey club. Not just with respect to talent but with respect to consistent effort, attention to detail and a willingness to battle through adversity. It is no secret that this team at it’s core is one of the most talented teams in the league, but in honour of the recent 40th anniversary of the Miracle on Ice… famous Head Coach Herb Brooks has a famous line in the movie: “Gentleman, you don’t have enough talent, to win on talent alone”.

I am a graduate from Wilfrid Laurier University and the University of Waterloo with a Bachelors of Business Administration and Bachelors of Honours Mathematics. I specialized in Finance and minored in Economics during my undergrad. My goal is to use my studies of data analysis to apply it to the greatest sport in the entire world. I have been a Maple Leafs fan since the day I was born and will continue to talk about them everyday until they win the silver thing! View all posts by Anthony Cino